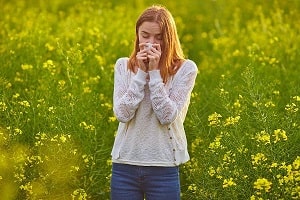 According to statistics, about 1 in 5 Australians are diagnosed with hay fever annually, making it one of the most common illnesses found in the country. In some parts of Western Australia, hay fever begins around late July or early August due to grass pollen season. Meanwhile, in Southeastern Australia, pollen season peaks during late spring and early summer which is right around October to November. Most patients mistake hay fever for a common cold or flu because of how similar the symptoms are. The common symptoms of hay fever are coughing, itchy throat, watery eyes, runny nose, and sneezing.

Some patients find that taking antihistamines alone do not reduce the symptoms of hay fever. If this is the case, alternative forms of treatment can be considered. Some opt for natural healing remedies and non-standard treatments like traditional Chinese medicine. Treatments such as acupuncture are a popular choice for patients diagnosed with hay fever to help provide relief from the symptoms.

Here we’ll be discussing how acupuncture works and how it can help with treating hay fever. But first off, let’s define what hay fever actually is.

What is hay fever?

Hay fever (allergic rhinitis in medical terms) is a condition that is triggered when a person comes in contact with environmental allergies such as pollen, dust mites, moulds, and even pet hair. Despite the name, hay fever isn’t actually triggered when you are exposed to hay. When the person is exposed to a particular allergen, their bodies respond by making an allergic antibody.

After continuous exposure, the immune system recognises the allergen as a foreign matter, triggering an inflammatory reaction. This allergic reaction causes the body’s cells to release histamines, causing capillaries to dilate which leads to symptoms associated with hay fever.

Hay fever can affect several organ systems and also trigger a number of different symptoms. Patients with hay fever are likely to experience the following:

How can acupuncture help with treating hay fever?

Acupuncture is a popular form of alternative treatment that stems from Traditional Chinese Medicine (TCM). This ancient healing method is performed by inserting thin, sterile needles into different acupuncture points found in the body. According to TCM, the main principle of acupuncture is to stimulate the energy channels inside the body (which they call meridians) to promote overall health and well-being. When an energy channel gets blocked, the flow of energy is disrupted, causing different illnesses to pop up as a result. By performing acupuncture, blood flow is stimulated and the energy channels flow in a steady stream again, unlocking the regenerative properties of the human body.

Evidence from systematic reviews suggests that acupuncture can help to relieve symptoms of hay fever. However, the evidence is mixed and the trials are generally of poor quality. More high-quality controlled trials are needed to fully document the efficacy of acupuncture.

Acupuncture is highly patient-specific, which means that it can further address any constitutional deficiencies that a patient might have. Acupuncture is believed to release neurochemical messenger molecules that result in biomechanical changes. This influences the body’s homeostatic mechanisms which can help accelerate physical recovery from hay fever symptoms. Acupuncture can also benefit patients by reducing pain and discomfort. When certain acupuncture points are stimulated, certain areas of the brain are affected which downshifts the body’s sensitivity to stress and pain.

Treatment at our clinic

At Baolin Acupuncture and Chinese Medicine Centre we use a combination of acupuncture and Chinese herbal medicines to treat hay fever. According to our clinic clinical experience, it would be much better to commence the treatment for hay fever before the hay fever season when the condition would normally present. In Western Australia, hay fever caused by pollen can begin in early August. We would recommend that hay fever sufferers should start treatment in April or May – 3 months before the hay fever season to achieve the best outcomes. Once the condition has kicked in, a reduction in the severity of the symptoms is the best that one can hope for.

Most patients feel immediate relief after the first session, and can be well under control within 10 sessions of acupuncture plus herbal medicines. Then only maintenance care for prevention of recurrence. This of course depends on the severity of symptoms and state of health. We also use Chinese herbs, herbal granules and/or Chinese herbal medicines further provide relief from hay fever symptoms.

Tips to reduce and manage your hay fever symptoms

When it comes to treating hay fever, it’s important to first identify the allergen that triggered the condition. This may be obvious in some cases like a dusty environment or due to grass pollen. But to be sure, a trip to the doctor is recommended. Allergy tests will be performed and your medical history will be examined to identify which allergens can trigger hay fever in your body.

When combined with conventional treatment, acupuncture can help provide relief from hay fever temporarily. It relaxes the body, it activates the patient’s healing mechanisms, and it can reduce hay fever symptoms immediately. If using antihistamines alone do not work for you, consider acupuncture as a supplementary treatment to help you recover from hay fever.

For more information regarding acupuncture for relief of hay fever symptoms please contact us at our Perth or Subiaco clinic (Perth Clinic: 9228 8828; Subiaco Clinic: 9380 4171). Alternatively, you can send us your queries through our online contact page.